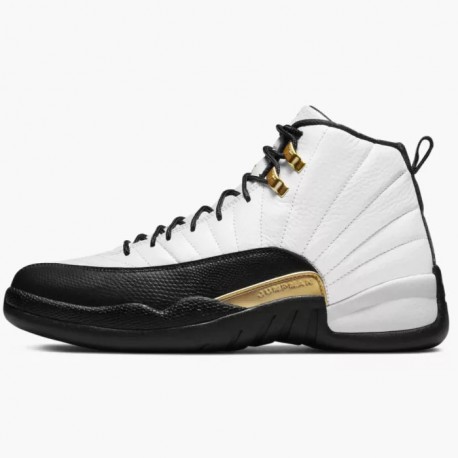 The Air Jordan 12 “Royalty Taxi” is a reimagined version of the original colorway of Michael Jordan’s retro basketball shoe from the late ‘90s that features several new modifications. A Holiday 2021 release by Jordan Brand, the new-look “Royalty Taxi” or “Royalty” mimics the Air Jordan 12’s original white-and-black “Taxi” color block, but with a few notable variations. Instead of a black leather mudguard, per the original design, the mudguard found on the “Royalty” is dressed in black suede. Also, the Jumpman plate above the midsole now appears in gold. Additional gold accenting comes into play on the Jumpman-branded eyelet holders and on the Jumpman and “Two 3” detailing on the white leather tongue, the latter of which were previously seen in black on the first “Taxi” from November 1996. The revised look of the Air Jordan 12 “Royalty” honors the 25-year anniversary of the original “Taxi” release. Release date: November 13, 2021